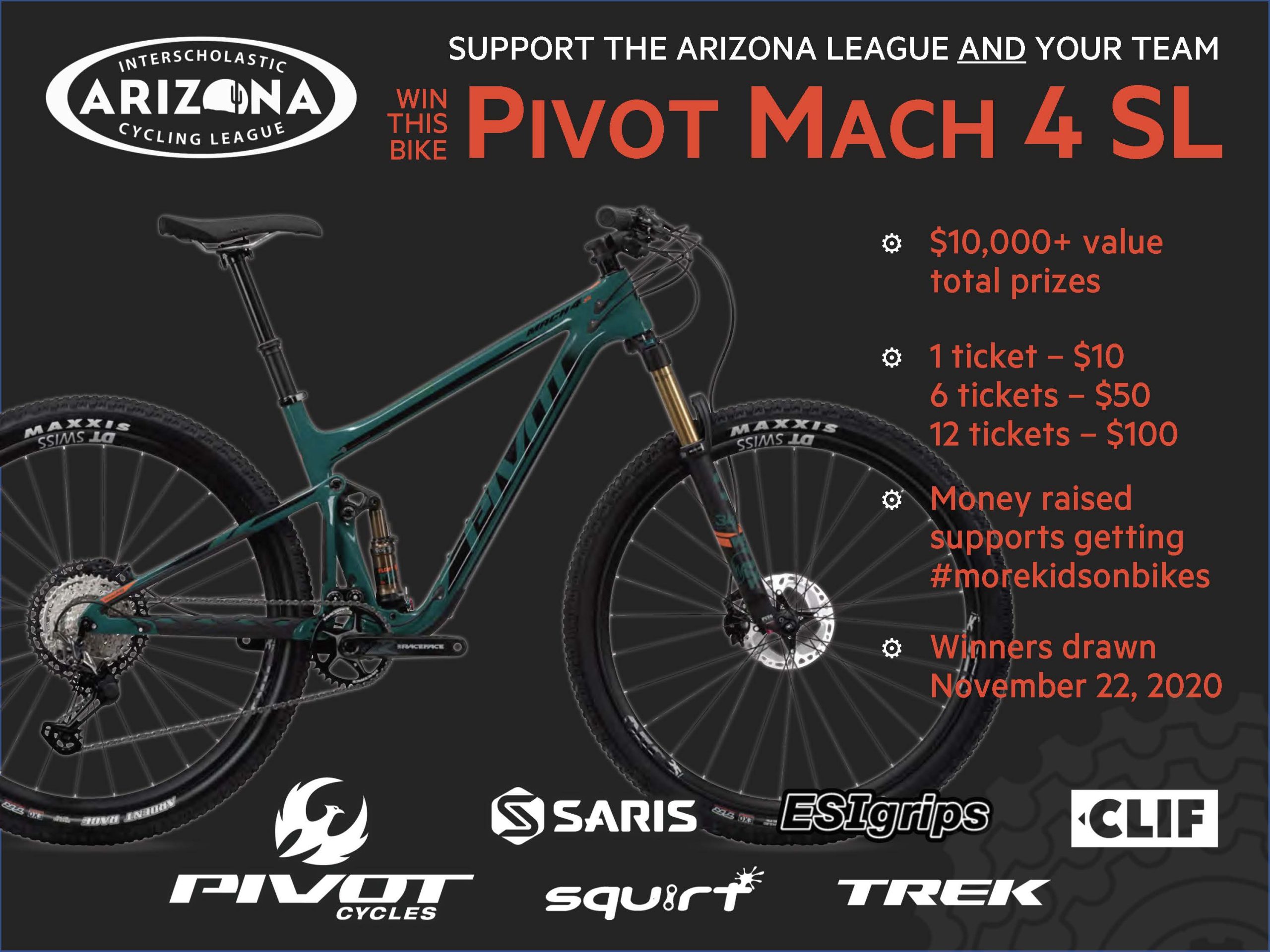 Proceeds Benefit the League and Teams 50/50!

In our community, team comes first. The top of the podium isn’t the top of the mountain or the end of the trail. Laughter fuels us. Community binds us. And friends and family bring out our best. The league is so much more than racing because life is so much more than a race. Today and tomorrow, Arizona needs the league and our teams, and right now your support can help keep this life changing experience rolling. And you could win a new Pivot Mach 4 SL bike or other great prizes, too!

The proceeds raised through this sweepstakes will be split 50/50 between the teams and the Arizona league. Select the team that you want to support when you purchase your ticket. Not associated with a team? Click the league map to find local teams in your area. The other half will stay with the Arizona league to improve the many programs, clinics and events that we host each year. The league will also set aside a portion of the funds to help families needing financial assistance to participate. 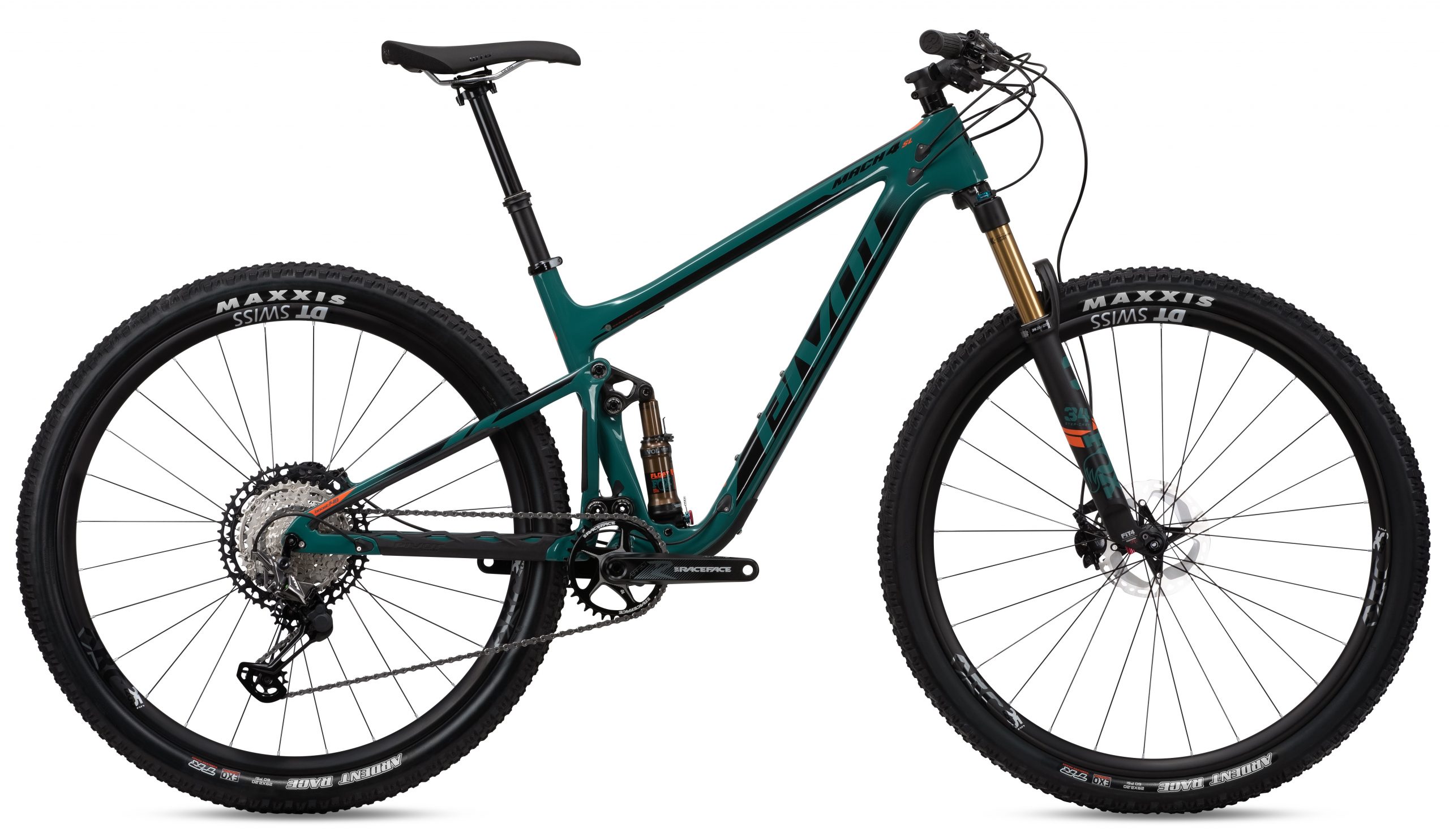 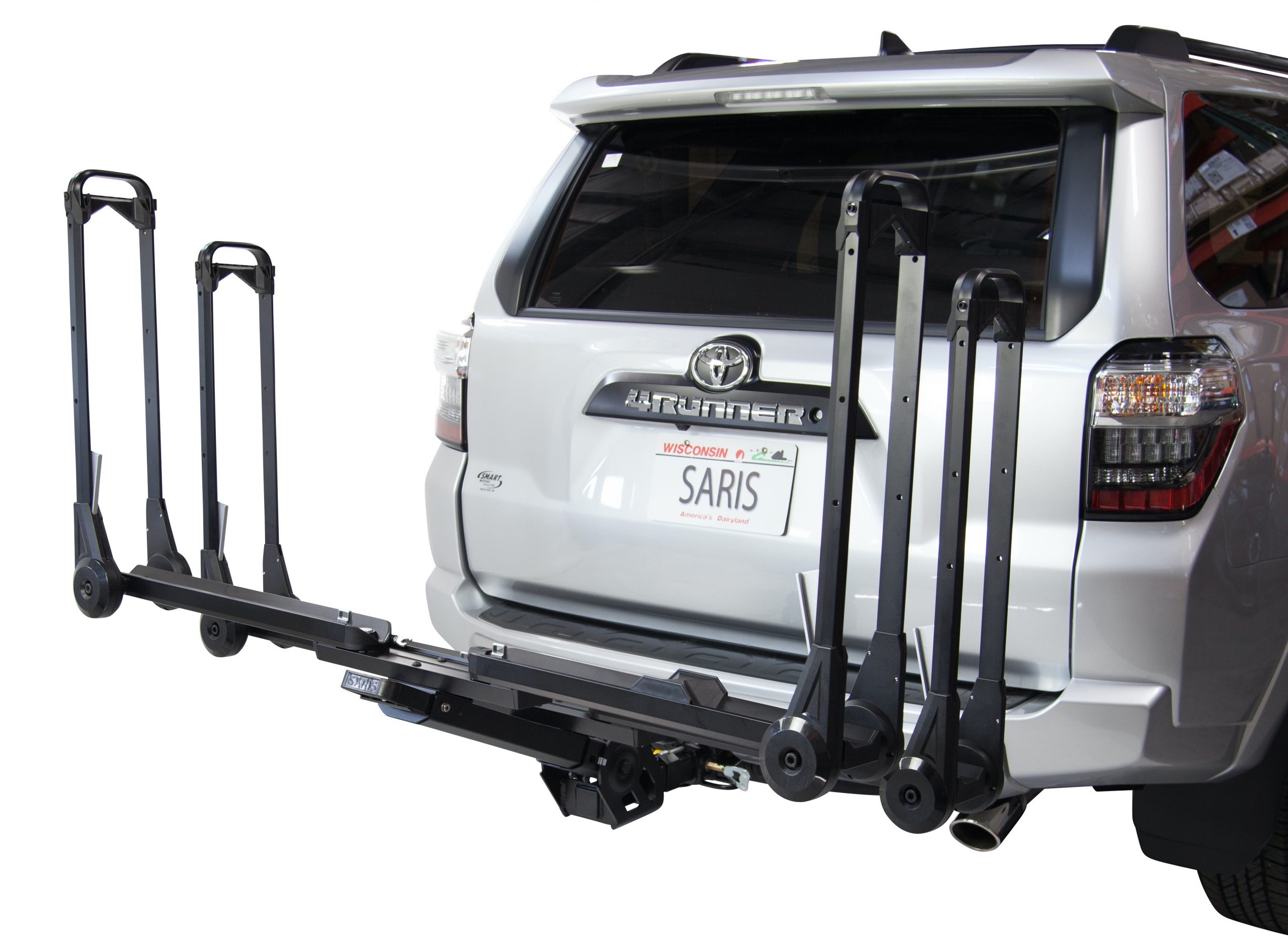 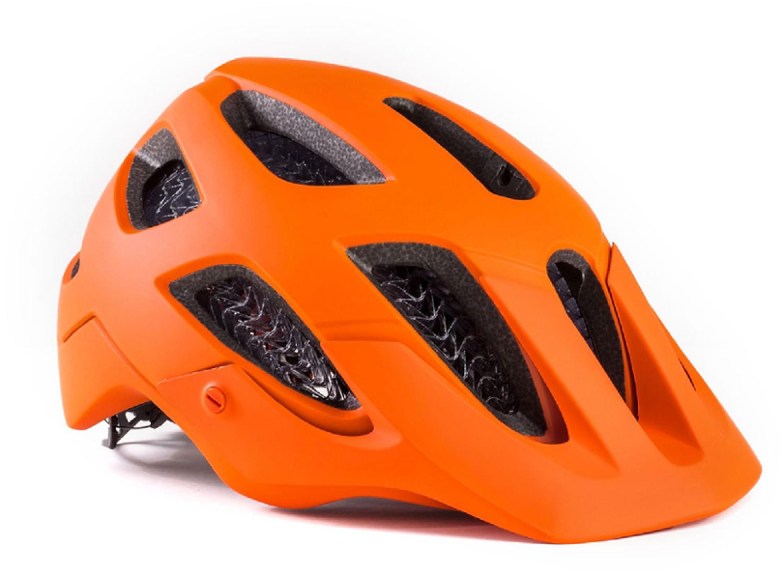 Each team that participates in the sweepstakes will keep half of the money they raise, and will have full discretion on how to spend it on their team. When a ticket is purchased online, the buyer selects the team that they want to support from a pulldown menu. At the end of the campaign sales will be tallied and each team will receive their split.

In addition, the top two teams that sell the most tickets per registered student-athlete (minimum six riders on team) will win prizes from Strike Visuals and Feedback Sports! 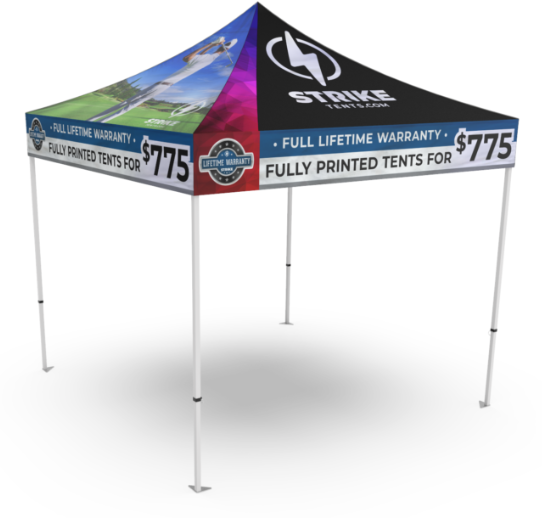 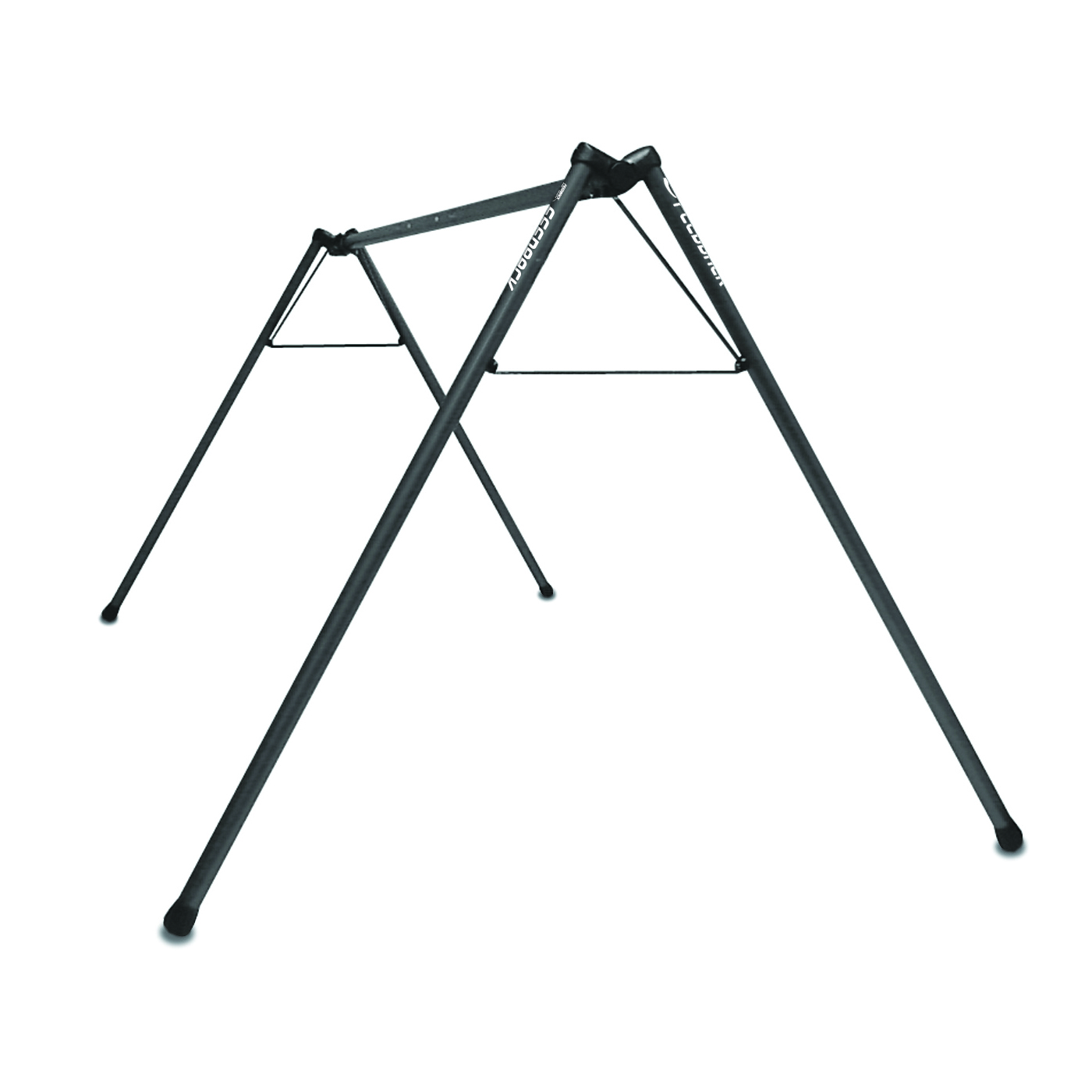 Eligibility: Arizona League and Team Sweepstakes (the “Promotion”) is open only to legal residents of the 50 United States and the District of Columbia and Canada (excluding Quebec), who are 18 years of age or older and located in the U.S. or Canada at the time of entry. Arizona Interscholastic Cycling League officers, directors, employees and agents (collectively, “Promotion Parties”), and their immediate family members (parent, child, sibling and spouse of each) and those living in the same households of each are not eligible. Void elsewhere and where prohibited by law.

How to Enter: Online Entry: During the Promotion Period, go to the following website: https://www.racerpal.com/register/arizonamtb/sweepstakes/ (“Website”) and purchase tickets during the Promotion Period (“Purchase Entry”). Entrants must complete all required information. Mail-in Entry: To obtain an entry without making a purchase, legibly handprint your name, e-mail address, street address, city, state or province, zip or postal code onto a self addressed stamped envelope and mail to Arizona Interscholastic Cycling League, 10115 E Bell Rd, Ste 107 #210, Scottsdale, AZ 85260. Requests must be received by November 6, 2020. Promotion Parties assume no responsibility for lost, late, misdirected, stolen, illegible, inaccurate, damaged, incomplete, non-delivered or postage-due mail; or for failure or unavailability of electronic equipment, communications or Internet connections; or other errors, failures or malfunctions of any kind. Limit of one mail-in entry per person.  NO PURCHASE OR PAYMENT OF ANY KIND IS NECESSARY TO ENTER OR WIN THIS SWEEPSTAKES. By entering via online or mail-in, you consent to receive email announcements from Sponsor.

Drawing: On or about November 22, 2020, in Scottsdale, AZ, the Promotion Administrator will conduct a random drawing from among all eligible entries received during the entire Promotion Period.

Prizes, Approximate Retail Value (“ARV”) and Odds of Winning: One (1) Grand Prize: New 2020 Pivot Mach 4 SL Pro XT/XTR with 120mm Fork bicycle, with market value of $6,399. The winner will choose the frame size and color for the prize. Thirty-two (32) or more Runner Up Prizes as described on Website.  No substitution, cash redemption or transfer of prizes is permitted except at Sponsor’s sole discretion. All federal, state, provincial and local taxes, and all other costs associated with acceptance or use of the prize, are the sole responsibility of the winner. All prizes are awarded “as is” with no warranty or guarantee, either express or implied. Winner of bicycle agrees Arizona Interscholastic Cycling League, or any of the Promotion Parties has neither made nor is responsible or liable for any warranty, representation, or guarantee, express or implied, in fact or in law, relative to the bicycle, including but not limited to its quality, mechanical condition or fitness. Arrangements for delivery of prize will be performed after winner validation. LIMIT ONE (1) PRIZE PER PERSON/EMAIL ADDRESS/HOUSEHOLD. Odds of winning any prize depend on the number of entries received. At the Sponsor’s discretion, unclaimed prizes may not be awarded.

General Rules: All federal, state and local laws apply. All potential winners (and/or their parent/legal guardian if a minor) will each be notified by telephone, email, regular mail or overnight mail, and may be required to complete, sign and return an Affidavit or Declaration of Eligibility and Release of Liability, and where lawful, a publicity release within a stated amount of time. The return of any notification as undeliverable or failure to respond to notices or return any documents in a timely manner or if a potential winner is found to be ineligible or not in compliance with these Official Rules, as determined by the Promotion Administrator, may result in disqualification and an alternate winner may be chosen. By participating, participants agree to release, discharge and hold harmless Promotion Parties from and against any and all liability or damages associated with this Promotion or acceptance, use or misuse of any prize received in this Promotion. Promotion Parties are not responsible for any typographical or other error in the printing of the offer or administration of the Promotion. Acceptance of prize constitutes permission for the Sponsor and its agencies to use winners’ names and likenesses for purposes of advertising and publicity without further compensation, unless prohibited by law. By participating in this Promotion, participants agree to be bound by the Official Rules and decisions of the independent Promotion Administrator, which shall be final in all matters relating to the Promotion. Promotion Parties are not responsible for lost, late, misdirected, stolen, illegible, inaccurate, damaged, incomplete, non-delivered or postage-due mail; or for printing, distribution or production errors or for technical, hardware, software, or telephone malfunctions of any kind, lost or unavailable network connections, or failed, incorrect, incomplete, inaccurate, garbled or delayed electronic communications caused by the user or by any of the equipment or programming associated with or utilized in this Promotion, or by any human, or other error, which may occur in this Promotion. If, in the Promotion Administrator’s sole opinion, there is any suspected or actual evidence of tampering with any portion of the Promotion or Website or if technical difficulties compromise the integrity of the Promotion, the Promotion Administrator reserves the right to void suspect entries and/or modify and/or terminate the Promotion and/or conduct a random drawing to award the prizes using all known eligible non-suspect entries received. The Promotion Administrator reserves the right to disqualify any individual who tampers with the Promotion or Website or acts in a disruptive or unfair In the event of a dispute regarding the identity of the person submitting an entry, entries will be declared made by the person’s name submitted at time of entry.

Choice of Law and Jurisdiction: This Promotion is offered only in the United States and Canada (excluding Quebec) and is governed by the laws of the State of Arizona. By entering, entrants irrevocably consent to the sole and exclusive jurisdiction of the courts of the State of Arizona located in the county of Maricopa for any action, suit or proceeding arising out of or relating to this Promotion.

Waiver: By participating in this Promotion, participant waives all rights to claim punitive, incidental and consequential damages, attorneys’ fees or any damages other than actual out-of-pocket costs incurred to participate.

All trademarks used herein are the property of their respective owners. Manufacturers of the prizes offered in this Promotion do not sponsor or endorse this Promotion and are not affiliated with the Sponsor or Promotion Administrator in any way.

Sign up to receive news, updates and information from the Arizona Cycling Association.