24 Hours in the Old Pueblo Contest

The Arizona High School Cycling League has teamed with professional mountain bike champions Rebecca Rusch and Todd Wells for a very special opportunity for high school student-athletes. Specialized Racing’s Rusch and Wells will be selecting three girls and three boys, respectively, to join them on a four-person team at 24 Hours in the Old Pueblo, one of the largest 24 hour events in the world, February 14-16, 2014 in Tucson, Arizona.

“It’s going to be a weekend that they’ll never forget. I’m really looking forward to it,” said Wells. For Rusch, this event is the first stop of the 2014 SRAM Gold Rusch Tour.  The focus of the Tour is to provide non-intimidating and fun cycling opportunities for women and girls of all abilities.  “I can’t wait to meet my new teammates and ride with them in Arizona.,” said Rusch. “I’m going to open up my toolbox and share everything I know with my team.”

The lucky winners will receive:

Still interested? It’s simple. As long as you’re a high school student in Arizona and race mountain bikes, all you need to do is answer the questions below and you’re entered for a chance to win. But, first and foremost…a few rules. 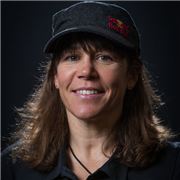 When describing Rebecca Rusch’s athletic achievements, it may be easier to talk about what she hasn’t done, but, like Rebecca herself, we’re doing this the hard way. Her national and world titles in whitewater rafting, adventure racing, orienteering, and cross-country skiing certainly impress, but they only set the stage; it’s the two-wheeled victories that really lengthen her resume. Rusch’s mountain bike accomplishments would strain the pixels on your screen. National wins across multiple off-road formats top the list, as well as record-setting victories at storied ultra endurance races like the Leadville Trail 100, Dirty Kanza 200, and 24 Hour MTB World Championships. Not content to wait for the race to come to her, Rusch also claimed the record on the 142-mile Kokopelli Trail, coming in more than an hour and a half faster than the previous champion. It wasn’t her idea, but it doesn’t take a professor to see why she earned the moniker “The Queen Of Pain.”

While maintaining this laundry list of accolades would be enough for most athletes, Rusch takes no such time to rest on her laurels. Her SRAM Gold Rusch Tour has been traveling to races and events across North America to help get more women in the saddle and riding their bikes through skills clinics, social events, and group rides. She created Rebecca’s Private Idaho, a grueling gravel road event in her hometown of Ketchum that attracts hundreds of riders to her backyard every year, all for charity. Organizations like the International Mountain Bike Association, World Bicycle Relief, PeopleForBikes.org, the National Interscholastic Mountain Bike Association, and the Wood River Bicycle Coalition can count her as an official ambassador and, in some cases, board member.

All that, and she’s still a firefighter and EMT with the Ketchum Fire Department and walks her dog, Diesel, just about every day. 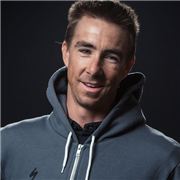 Todd Wells fell in love with the bicycle at an early age starting with BMX from the age of five through sixteen. After graduating high school he picked up his first mountain bike and has been on a tear ever since. He found his way out to Durango, CO where he attended Fort Lewis College and began a pursuit of his career in cycling. Wells won two Cross Country Mountain Bike Collegiate titles for Fort Lewis College and the inaugural Semi Pro NORBA National Series title in 1996. before taking a break from his studies to become a full time professional cyclist with the Specialized Mountain Dew team. His initial professional career was short lived as he decided to hang up his wheels at the end of the 1998 season and finish his collegiate studies at the University of Arizona. After graduating in 2000 with a B.S. in Management Information Systems, Wells started training once again with his sights set on the professional ranks. Some good results landed him a contract with the Mongoose Hyundai team and he was back on the circuit full time by the end of 2001. By 2008 he was back where he started with the Specialized team and his results seem to get better with age.

He has won 11 National Championship titles across four disciplines. In 2011 he took on some endurance races and racked up wins in both the Leadville 100 and La Ruta de Los Conquistadors. In 2012 he made his third trip to the Olympic Games, where he placed a career best 10th, won his second Pro XCT series title and second Pan American Championship title, and stood on the podium at the Windham World Cup. He added to his palmarès in 2013 by winning national titles in marathon and short track cross country and adding a third Pro XCT series title.

When Todd isn’t racing all over the world you can find him in one of three places; hanging out with his wife Meg and dog Winston, grinding it out on the golf course or hitting the dirt jump trails around Durango or his winter home of Tucson, AZ.